I’m an AT&T grandfather – I’ve got the iPhone unlimited data plan, for which I pay $30 a month over voice and text fees. As we all know AT&T has eliminated this plan level for new customers allowing them a choice of a 2GB plan for $25 or 200 MB for $15.

I know my data habits I’d be a fool to go for the 2GB plan for only a $5 difference and there’d be no way I’d stay under 200 MB per month. That being said, I don’t travel a lot for business, am not huge into mobile video and really don’t do much data-heavy on my phone. And so while I found news of AT&T’s attempt to curb their data heavy users by throttling their speeds interesting there was no way it would change my life.

That was, until I got “the letter” last month in November. I was the 5%. My data use was in the top 5% of AT&T customers & I was threatened with having my speeds throttled if it happened again. Thanks for the warning dad – I’ll be sure to fill up the car next time.

And so I was more careful of turning on my wifi while in the vicinity of trusted networks and did all the ‘good data things’ a netizen is supposed to do.

Then, in December,I got a text message, my “data use is approaching the top 5% of users.” 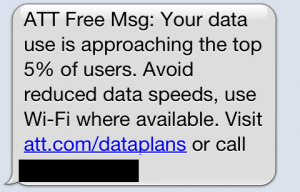 That’s simply impossible – it can’t be that for months I’ve been fine, then suddenly two months in a row I’m that close to the top of the list. After all, I’m special, but still….

I decide to check to see my data use so far that month (thanks for the handy app AT&T) – 1536 MB – far below (around 75% of) a 2GB cap (the level below my now impossible to get plan) and certainly nowhere near “unlimited.”  And, on the last day of my billing cycle no less. I check the prior month – the month I actually was in the top 5% – 2110 MB, which would’ve placed me just over the 2GB cap if I was on that plan. 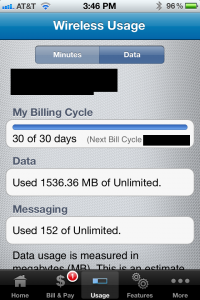 And now here’s the point: It seems AT&T has realized if they continually nag their top 5% of unlimited data users, and punish them with throttled speeds and threatening texts, they’ll respond in usual Pavlovian manner and cut their data use – perhaps to the point of their use being below cheaper data plans. Of course if you always penalize the top 5% of users that threshold for punishment gets lower each time – meaning less and less data use…for the “unlimited” plan people.

Think about it this way – if a school were to continually cut the bottom 10% of a class after each exam, after 4 exams there’s only be 65% of the class left.  But in this case they’re just punishing the top 5% – no matter how much data they’re actually using.

Now that they’ve lost T-Mobile it’s probably time AT&T kiss and make up with their most loyal customers and stop harassing the ones that actually know and appreciate the services they provide before those customers decide there are better options out there. I know I’m looking.

6 thoughts on “AT&T Math: 2GB is More Than Unlimited”

This site uses Akismet to reduce spam. Learn how your comment data is processed.